Electric Scooters, A Sustainable Solution or a Dangerous Addition to our Streets? 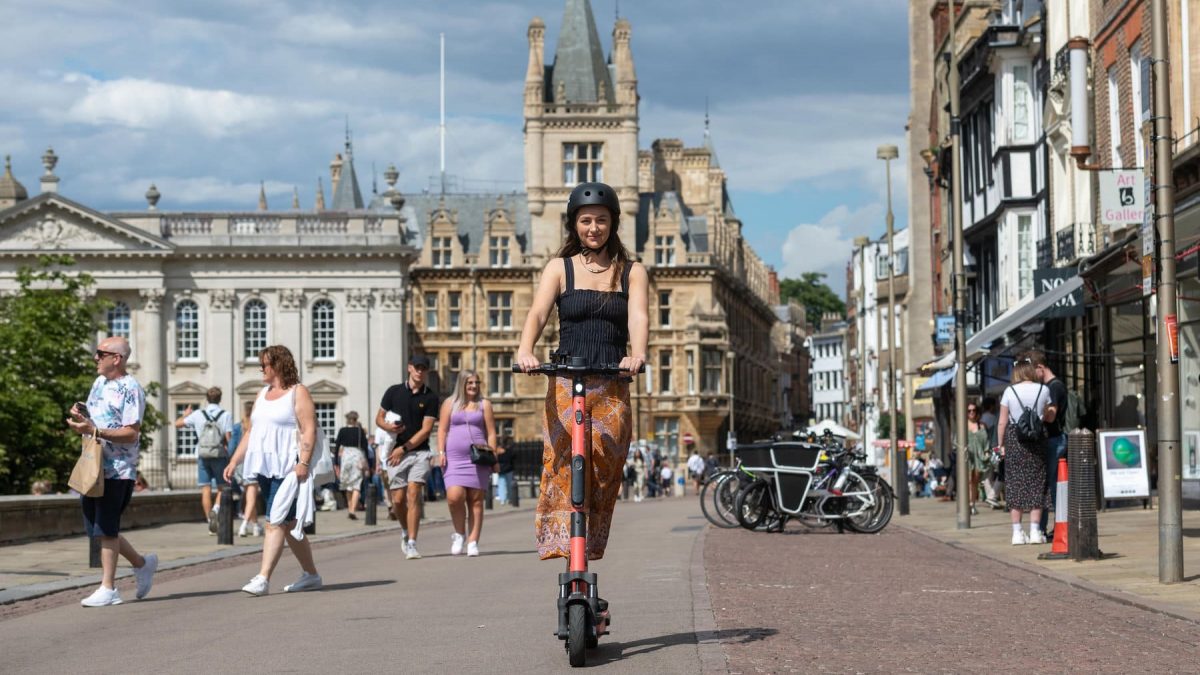 Over recent months the debate on electric scooters has become an increasingly controversial topic. We hear plenty about accidents on our roads and police reports of reckless riding, but are we forgetting why they are here to begin with?

I, for one, can think of many reasons why we should air on the side of caution when it comes to legalising electric scooters, but I can also see how these 2 wheelers can benefit cities across the globe, and are in fact doing so in many countries.

It’s a hot topic, and a lot of people are talking about it; valid arguments either for or against. However, are there really arguments against, or are there simply hurdles that we should work to overcome before we go legal.

In this article, I want to dive a little deeper and explore the pros and cons to electric scooters to determine whether or not the UK should welcome them.

Is History Repeating Itself? 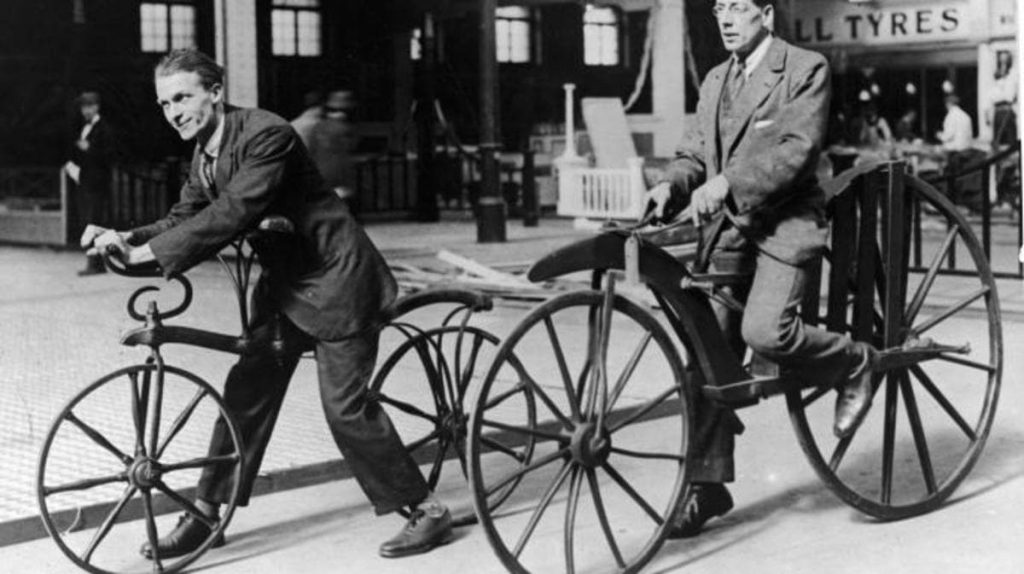 If we look back in history we can see this is not the first time that something that was once deemed a “nuisance on the roads” became something many people came to love.

Back in the 80’s we saw bicycles be renamed as “carriages” in order to ensure they could not be banned from our roads.

If we look even further back, cars were also once deemed too dangerous for public streets until regulations were put in place to make them safer.

In 1903, the first driving licences were issued and laws stated that all cars must be registered. This led the way in making driving safer for both those behind the wheel and pedestrians.

Whilst you may argue that I’m comparing apples to oranges, you have to admit that the rules of the road have evolved over the years, and it’s no short feet to assume that perhaps we’re entering another revolution with Electric Scooters.

When the highway code was updated in 1988, to ensure that consideration be given to cyclists, a new attitude was born and more work was put into making cycling safer.

Will the same be done for Electric Scooters? By legalising E-scooters and defining new safety regulations for them, will scooting through the city become a more favourable means of transport? 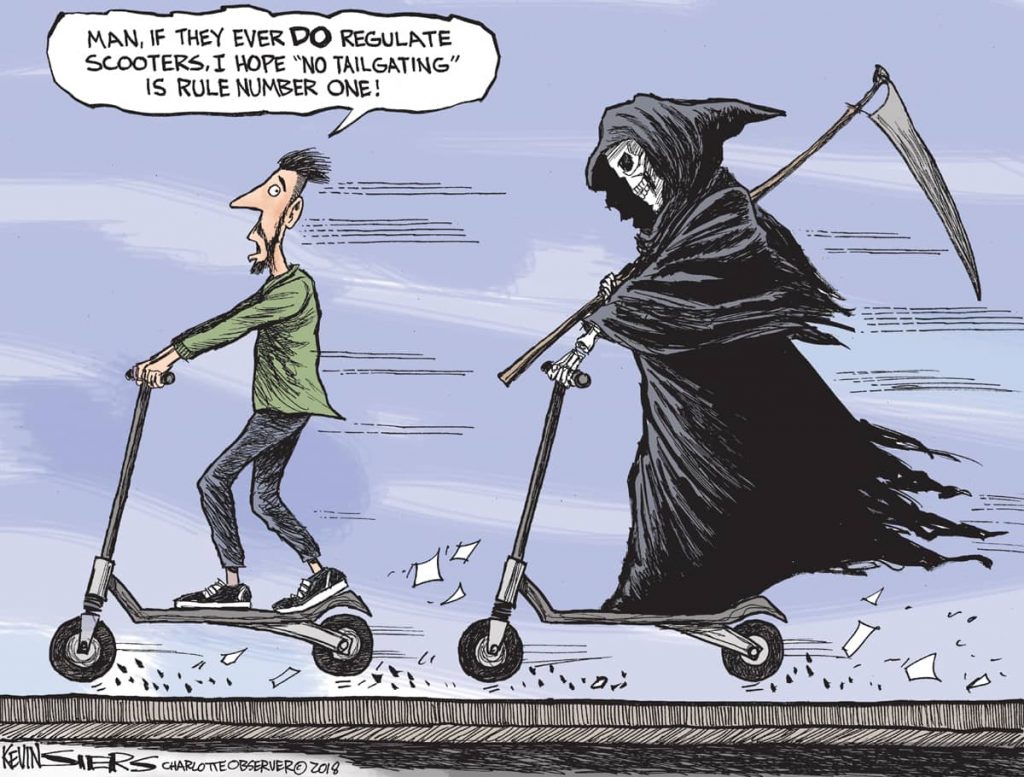 There’s no denying that Electric Scooters have been at the centre of many accidents and incidents on our roads. However, it must be said that a scooter does not ride itself into a car, it doesn’t park itself in the middle of the road and it certainly doesn’t ram itself into people. There comes a point where we must stop blaming the inanimate object and look to the person who is riding.

We don’t blame car accidents on the car. If a train doesn’t stop, we don’t blame the train. Instead we train humans to be responsible. We ensure that the people controlling these vehicles understand the rules and adhere to them. It’s my strong belief that we should and most definitely can do the same for scooters.

Can We Minimise the Risks?

Much like cycling, we can ensure that there are set rules when riding on the road, we can make it a legal requirement for riders to wear safety clothing, attach lights and stick to the designated cycle lanes. There really is no reason why we can not set out regulations and rules for riders to make Electric Scooters safer for all.

I’m sure there are many readers who would argue with this, and I must admit it’s a bold statement to make. However, I remind you once again to consider cycling. By creating rules on our roads, we have made cycling safer for both cyclists, drivers and pedestrians. Why can’t we do the same for scooters?

A Bid For Sustainability 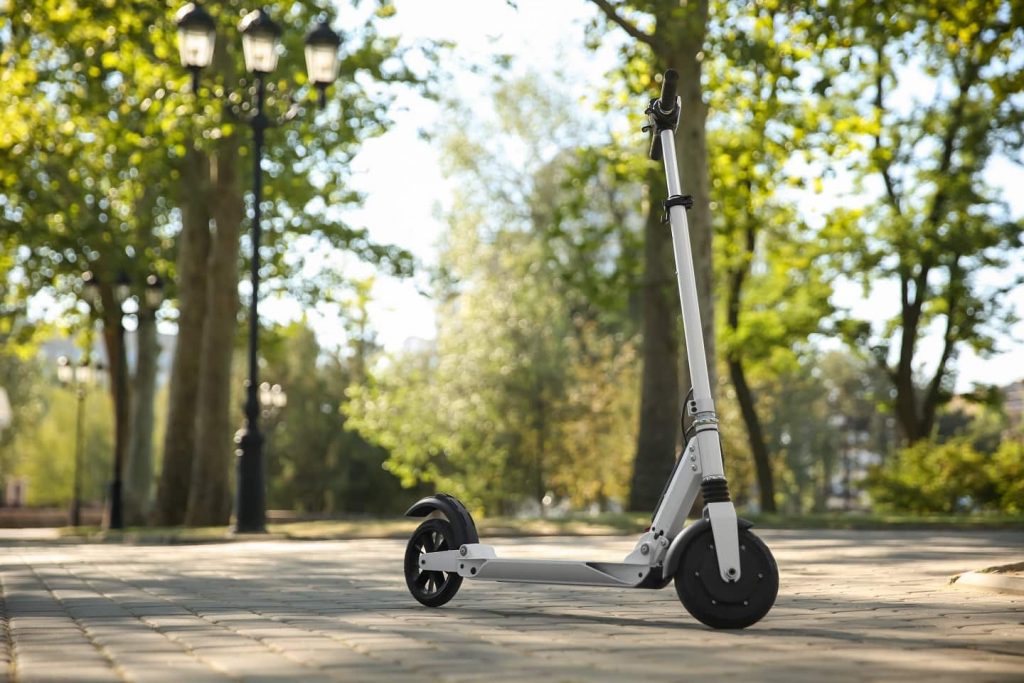 Okay, so we’ve got the most controversial part of the debate out of the way, now let’s look at why Electric Scooters are here at all.

We understand now, more than ever, the dangers the world faces by global warming. With more and more carbon entering our atmosphere every day, it’s more important than ever to find more sustainable and environmentally friendly solutions to fight back against climate change.

And so man created electric vehicles. Electric transport does not produce carbon dioxide, meaning they do not add to our already overloaded carbon build up. By switching to more renewable energy sources such as electric, people can minimise their impact on the environment,

Electric Scooters is one of those EV solutions. There’s no need to drive around the city, pumping carbon into the atmosphere. You can just scoot – no carbon, no parking, no hassle.

But What About Battery Production & Disposal?

It may not be the perfect solution, but it is a big step in the right direction and with the development of new batteries such as Solid State Batteries, soon we won’t have to produce nearly as many as we currently do. Compared to Lithium-ion, Solid State batteries ensure better energy efficiency, size, compactness, lightweight, and increased running range.

But don’t the batteries blow up? 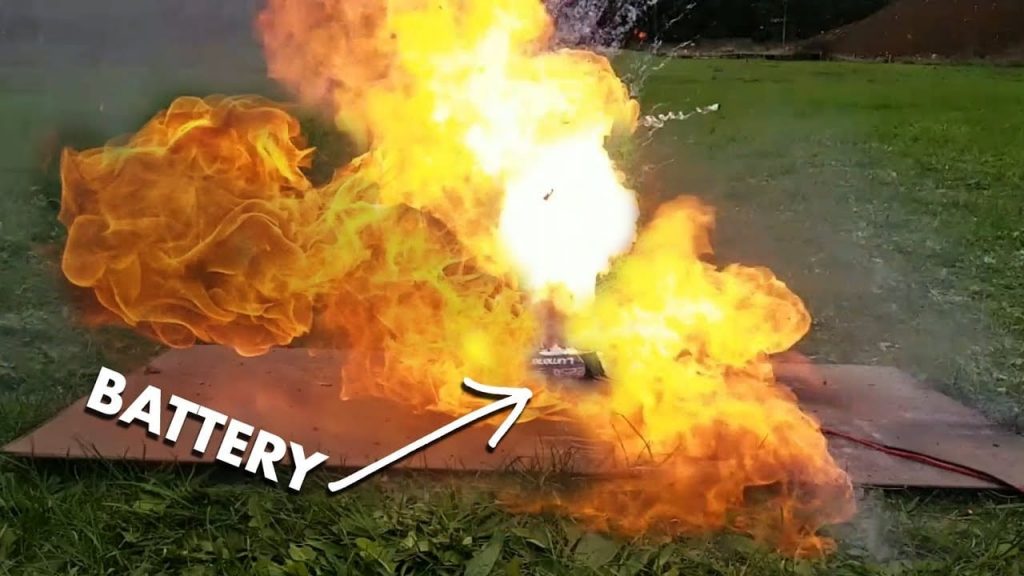 If stored incorrectly there is a small risk of combustion. However it’s the responsibility of retailers to educate customers on how best to care for their batteries. By doing so correctly this can be avoided. It’s also worth noting that this is very rare, and by being responsible it can be avoided.

The solid state batteries, which should enter the commercial market in 2026,  use a solid electrolyte and  therefore do not present the same combustion risk as lithium ion batteries.

Worth mentioning here is that only by supporting the development of new electric technologies, can we see them improve. If we simply say “no we only like petrol!”, we would never advance.

One of the largest contributors to our carbon footprint is the CO2 emissions delivered by petrol and diesel vehicles. In order to tackle this, many companies have developed EV alternatives, and whilst we know that electric cars produce less emissions, they are however very expensive to manufacture and therefore purchase. This means that they are not yet a variable option for many people.

While many would argue that the purchasing cost of electric scooters is high, if we compare it to the cost of cars or even electric bikes, e-scooters are easily more affordable. Another pro to electric scooters is that they cost nothing to tax, they cost less than 1p per mile in terms of charging and there’s no need for a licence. You’ll also find that many e-scooters fold, so there’s no parking costs, just carry it with you.

Electric scooters also have very little maintenance so it’s not going to cost you an arm and leg for repairs or servicing.

What About Speed and Range 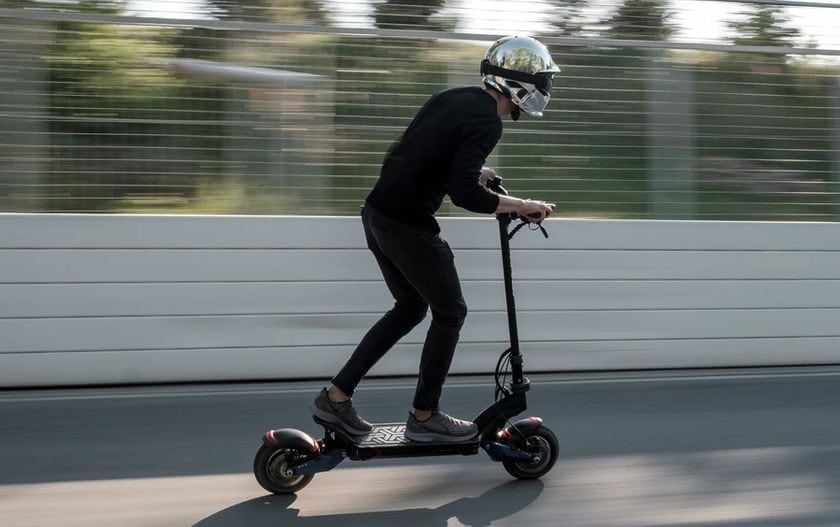 One of the most common gripes people seem to have with Electric scooters is speed and range. And I’m not going to deny that electric scooters do not match the speed or range of a car… of course not! They only have a average range of up to 28 miles and are restricted to 15.5 mph.

My counter argument, however, is that Electric Scooters are not designed for long distance travel or high speed races, they are in fact designed for getting around the city. Popping to the shops, getting to work or college, or even for leisure. These are not long distance commuting machines, they are simply a fun, convenient and affordable way for getting around, reducing the number of cars that need to enter the city centres.

Do You Hear That? A Silent Solution to Noise Pollution

My favourite thing about EV alternatives… the silence. Maybe you didn’t notice but the city centre is a pretty loud place to be. Wherever you are there’s no shortage of car engines, horns, loud music that only 2% of the worlds population would choose to listen to… it’s just so peaceful!

With electric cars, bikes, electric scooters, electric mopeds, there is no noise. It’s quiet and peaceful. With fewer cars in the city centre and more EV alternatives, the streets would be much quieter, and sleeping in your city centre apartment would be a dream, walking through the park would be peaceful and having a conversation outside would be a delight.

By allowing wider use of electric scooters, we can minimise the noise as well as the carbon.

Change Now or Change Sometime in the Future?

Whether we like it or not a change needs to happen. Carbon needs to be reduced, but each year more people move to the city and the population increases. With a bigger population comes more demand for transport, so how do we stop our carbon emissions from climbing… We need alternatives and electric scooters could be the answer.

Electric scooters would be regulated. They would be safe if ridden appropriately. They are diverse and suited to a wide range of people. They are reliable. They do not produce carbon. They are quiet. And they are affordable to more people, which means right now, they could be having a more positive impact on our environment… if only they were legal. 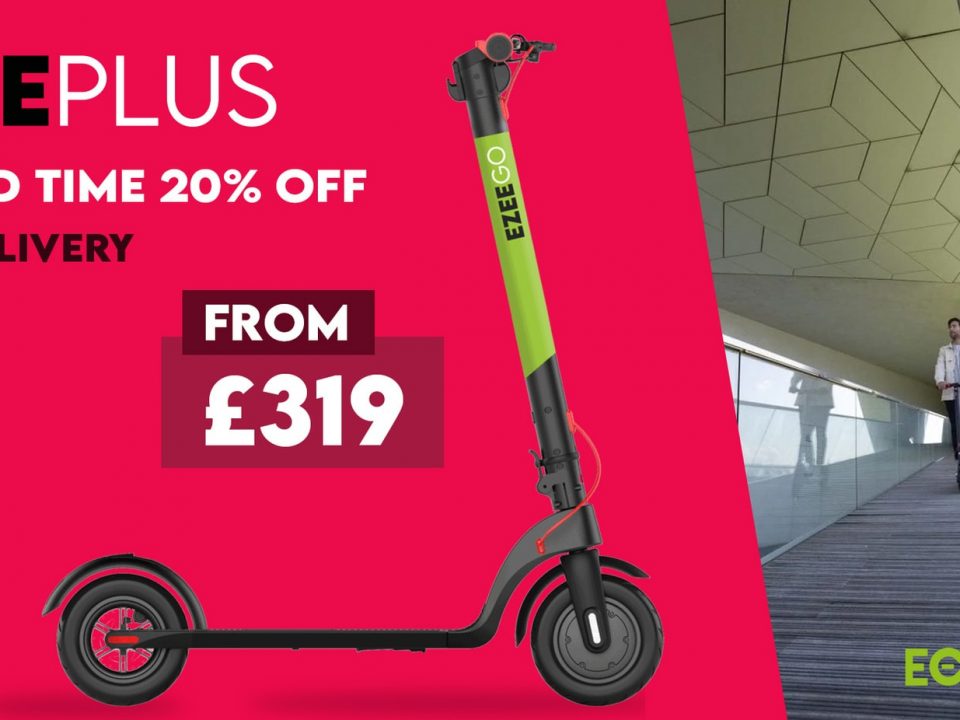 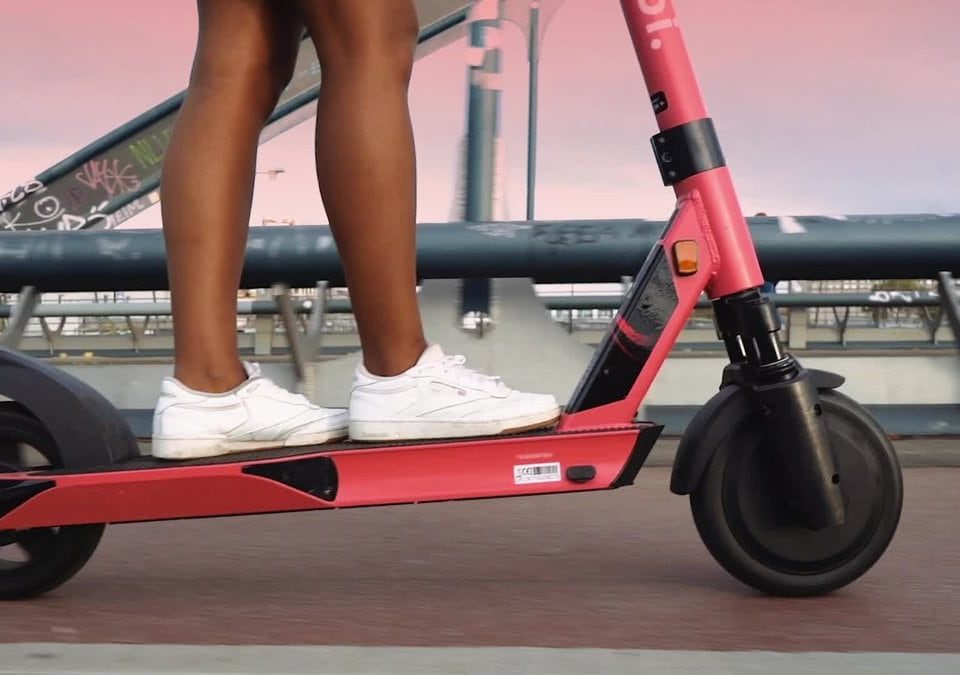 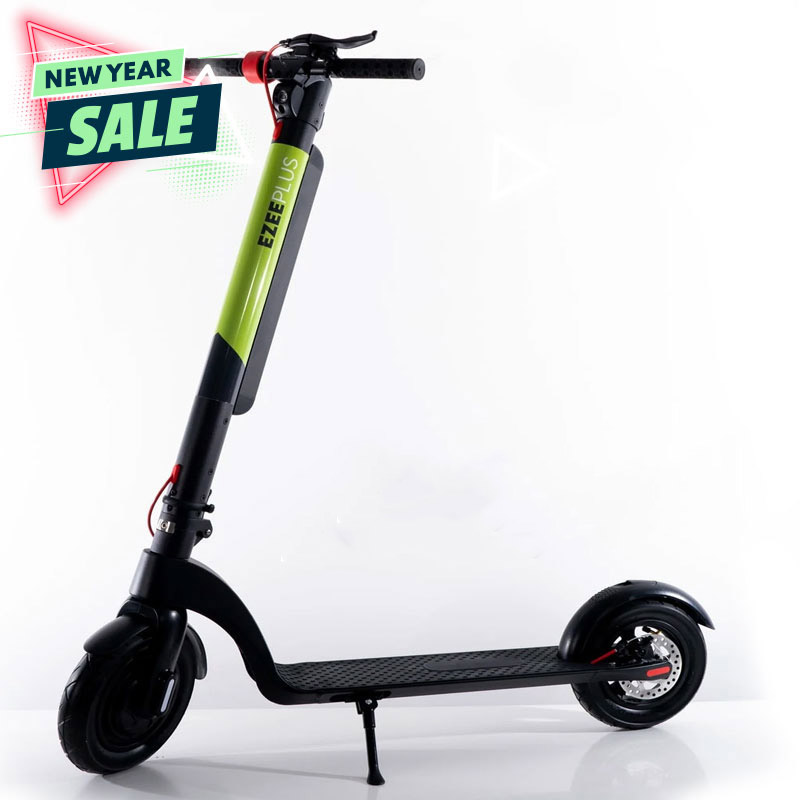